I am so Grateful. GREAT. FULL. that there are women and men in this world like Miss Julie and her family.

The boy and I have been here 4+ weeks. We were together, for what felt like an eternity (1 week) in Ethiopia.  Today... Today... it all came crashing down.

He is a champ.

He is doing better than me.

How are we really doing?  I can't answer. I have no perspective. I'm in the thick of it and can't see through the weeds. Literally. Zero. Perspective.

I read the books and the blogs and the rights, wrongs, bests and suggested means of getting through.  But you know what. I don't remember anyone writing anything in any attachment parenting about alternatives for single parenting.  Seriously.  Could someone have made even a parenthetical mention about possibly finding alternatives.  Cause I'm fearful I'm creating a monster and I'm turning into the ugliest part of myself- and I don't like it. Don't like it at all.

I need a reset button.

Days like.... this week- I try to keep remembering the Monday in the orphanage- The day after the Special Sunday- that we didn't get to see them at all. I remember his face when he heard my voice. That laugh. That sense. That hand pulling me down the stairs. That boy who loved that I was there. Today I remind myself- to just be there.

I re read this entry from Julie. Really I only needed the first couple paragraphs... no judgement till six months.   We haven't hit six weeks (believe it or not).  Thank you Julie. I've said it all before a hundred times and you've heard it from thousands.  You- are a gift that keeps on giving. 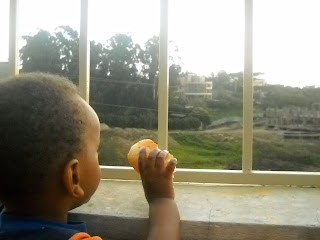 I used the think he was just trying to flash his eyelashes. I now know this look means "I gotta go kaka" 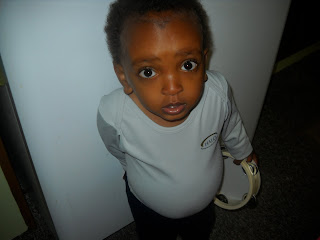 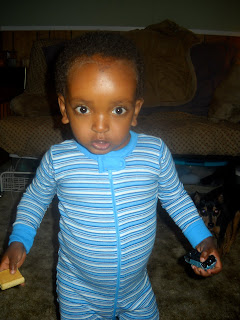 Do I look bloated?

Hey everyone.  He and I are doing better than expected-- I think?--- at least today.  Bonding is going well- but confidence in his security and in me is still lagging greatly. I guess that is to be expected.  We've only been home one week.

Two weeks ago today, in Ethiopia, the goodbye ceremony was held and he joined me at the guest house- it also marks the last time he was at the care center that brought him back from the brink of starvation.  While in Ethiopia, I had the chance to meet Doctor Abiye.  'T' remembered him and ran to him laughing immediately.  But then ran as far away as he could, scared, confused and looking back and forth between the both of us.  When we told him to come ,"Nah"- he screamed and cried! (That was the first time I'd heard him cry at all)   Abiye said that they had a special bond and that T was his boy for some time. We spoke for a long time and he didn't speak technically about his history or medical progress but personally, sentimentally, reminiscent.  Abiye left and T was more distant with me than usual.  That night was the first night, I heard my son cry in his sleep.

He is doing a bit better sleeping without me. Today marks the 3rd time he has slept in his own bed for nap time. I finally pronounced "go to sleep" properly so he understood "hee Teh NAH"...  he's been sleeping for 3-4 hours in the afternoon- but I think I may need to start waking him up earlier.   (maybe next week- now I'm getting stuff done...sorta).  We start winding down for bed time about 7:30-8ish and usually asleep by 9pm.  (ya- gotta find a way to cut that down, someday... )

We are open to accepting visitors!  Yay!  Just give us a call to make sure he's awake.  In fact, mommy is actively accepting invitations to distract child so she can pick up, do dishes, attempt to shower and (gasp!) shave under pits (rather impossible task when holding child with one arm in shower....). No guarantees this distraction technique will work, as he still isn't too confident with me out of the room for any length of time and actually loves loves loves loves loves the bath and shower.... (just please Kid- let me scrape off the rest of this Ethiopian / airline crud lingering on my scalp!)

Thank you everyone for all your support and graciousness. We've only just begun- but you all make it easier.
Posted by Sha Zam- at 2:36 PM 6 comments